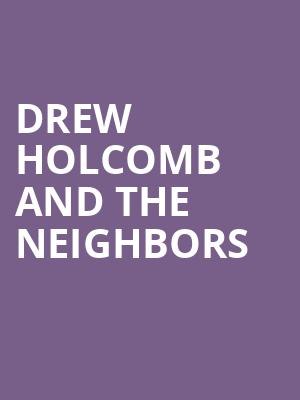 Drew Holcomb and the Neighbors

Drew Holcomb and the Neighbors are one of those quintessential combos that take their inspiration from the heartland and turn into music for the rest of the country, if not the world.

Why See Drew Holcomb and the Neighbors?

Drew Holcomb and the Neighbors

American band Drew Holcomb and the Neighbors gear up for a new tour! Since forming in 2006, the band has sold a whopping 150,000 albums, toured the world, and had their music featured in numerous national TV shows. The Tennessee natives have also performed alongside acts including Willie Nelson, John Hiatt, Needtobreathe, and Amos Lee.

The band boasts a wide range of influences behind their soft yet powerful sound and describe their latest album as "a highly collaborative album" that focuses on "the things that truly stick with you - including family and friends, music and memories, people and places - in a fast-moving world."

Seen Drew Holcomb and the Neighbors? Loved it? Hated it?

Sound good to you? Share this page on social media and let your friends know about Drew Holcomb and the Neighbors at Tower Theatre OKC.